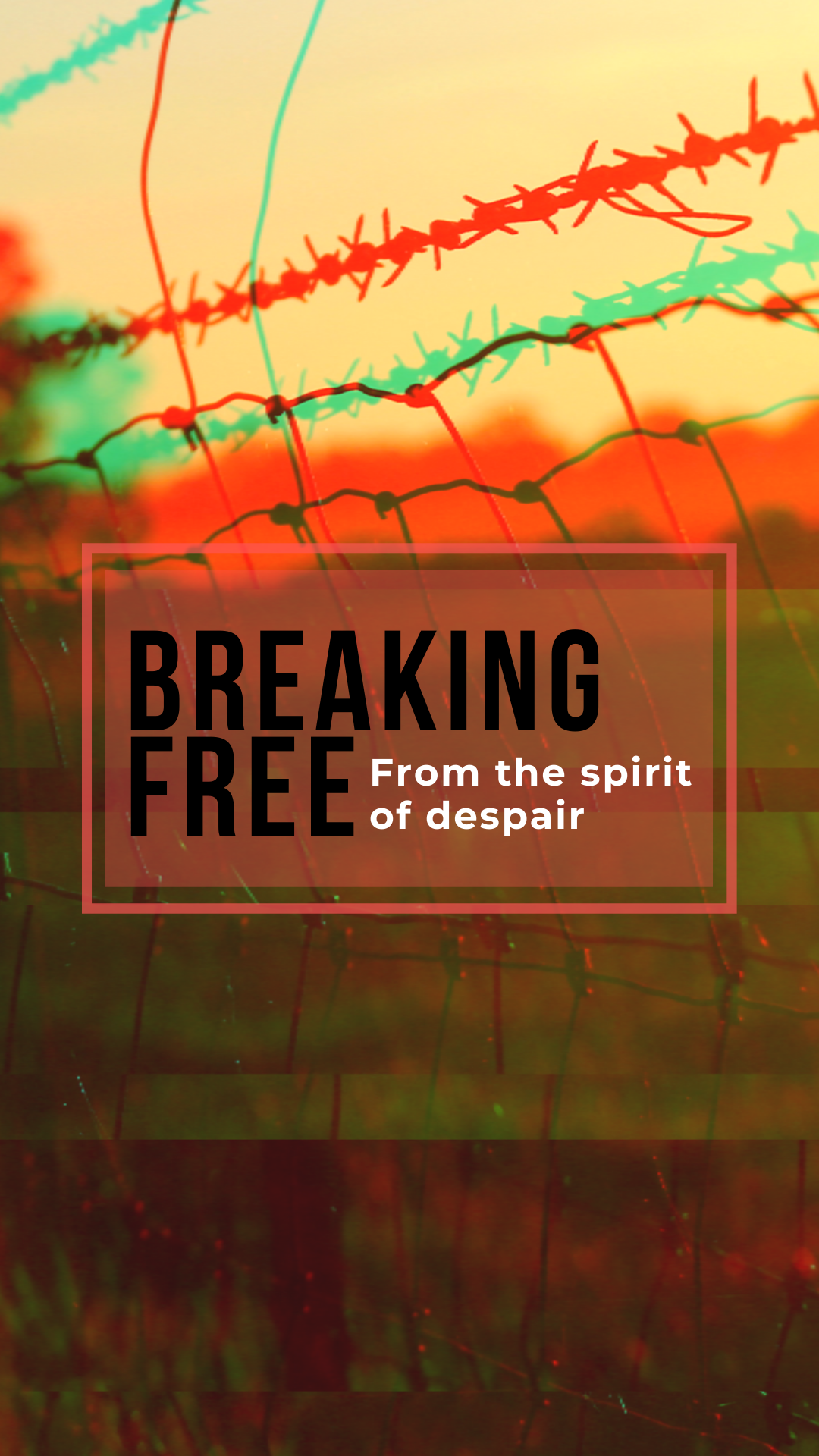 Breaking Free from the Spirit of Despair

1 Kings 19:3-5-  3 Elijah was afraid and ran for his life. When he came to Beersheba in Judah, he left his servant there, 4 while he himself went a day’s journey into the wilderness. He came to a broom bush, sat down under it and prayed that he might die. “I have had enough, Lord,” he said. “Take my life; I am no better than my ancestors.” 5 Then he lay down under the bush and fell asleep.

The prophet Elijah is one of the most towering figures of the Old Testament. Known for calling down fire from Heaven on Mount Carmel it can seem strange to find him in the very next passage running afraid and hiding under a bush in total despair. This instance is proof that no matter how big the breakthrough is we are still as human as everyone else. In the spiritual realm there is a hierarchy of fallen angels. Elijah went from low ranking demons on Mount Carmel to facing a higher ranking principality operating through Queen Jezebel. The old saying “new level new devil” is a great description of what caused Elijah to be in despair under the broom tree.

1 Kings 19:3-5- “All at once an angel touched him and said, “Get up and eat.” 6 He looked around, and there by his head was some bread baked over hot coals, and a jar of water. He ate and drank and then lay down again. 7 The angel of the Lord came back a second time and touched him and said, “Get up and eat, for the journey is too much for you.” 8 So he got up and ate and drank. Strengthened by that food, he traveled forty days and forty nights until he reached Horeb, the mountain of God. 9 There he went into a cave and spent the night.”

The only way to win spiritual battles, especially high level spiritual battles is through the assistance of God. It required the dispatch of a warrior angel of God to get Elijah back on his feet. The water and the bread represent the Holy Spirit and the Word of God. It wasn’t the angel that Elijah relied upon to recover, it was the Divine provision of water and bread. Did you know that you can have victory in your spiritual battle today? You must only turn your eyes to the Divine provision of Heaven through His Spirit and His Word.

Matthew 26:41- “Watch and pray so that you will not fall into temptation. The spirit is willing, but the flesh is weak.”

Elijah grew very tired during his spiritual battle, his flesh had become weak. But even though he was weakened under the enemy’s attack God’s provision was sufficient. We must remind ourselves that even when our flesh is weak God’s Spirit is still willing to assist us in battle. Instead of crying out in despair and depression, let us cry out for Heaven’s sufficient provision. You need to know that His help is truly enough to break the power of whatever attack you are under in Jesus name!

Heaven’s provision of the Word of God is critical to our success in spiritual battle. When Jesus was tempted in the wilderness for 40 days and 40 nights He defeated the devil by quoting the scriptures. As a Jew, Jesus was raised to know and memorize the Word of God, so much so that even when He was a young boy He would teach the Biblical scholars in the Temple. We must also become students of scripture so that when the enemy comes against us we can draw from the well of God’s Word and have victory over the schemes of the enemy. Let the Word do the work!

Prayer for today: Lord, I ask for Your mighty power to fill me to the uttermost and break all fear, anxiety and despair away from my life. Give me grace to rely upon Your Spirit and feed upon Your word. Carry me through the battle when I run out of energy to fight. Teach me to receive Heaven’s assistance during every moment. Let You abiding presence rest upon me now in Jesus name, amen.